Smell is a vulnerable sense and olfactory dysfunctions are common. Few people appreciate the range of information provided by the sense of smell, or think about what life would be like if that information was lost – until it happens to them.

What Can Go Wrong?

1. Even though they are tucked away inside the nose, the olfactory receptor cells receive a constant barrage from the outside world with every breath we take. This means that they are exposed to viruses and bacteria, dust and particles, and environmental chemicals, all of which can damage: 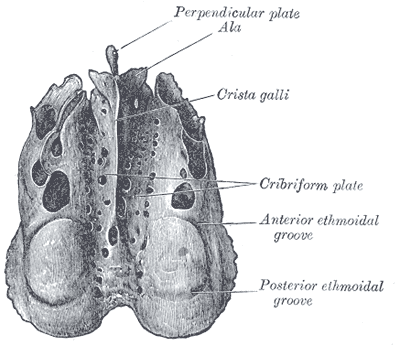 3. The anatomic location of the olfactory nerve, which carries smell information from the receptors inside the nose to the brain, makes it highly susceptible to physical damage. Olfactory nerve fibers pass through a honeycomb-like bone structure known as the cribriform plate as they travel from the nose to the brain. These nerve fibers are at risk of being crushed or severed when the force of a head injury causes the brain to collide violently with the skull.

Because scientists still don’t completely understand how the sense of smell works in healthy individuals, it is often difficult to identify exactly what goes wrong when a person loses the ability to smell. Sometimes the underlying cause is apparent, as in the case of head trauma. More often, physicians must try to identify the underlying cause through a careful examination and case history. Even then, the cause often cannot be identified conclusively.

Here’s what we know about how the most common causes of anosmia damage the olfactory system.

Studies at Monell measured differences in patterns of airflow through the nasal cavity, providing a technique to help evaluate if the degree of blockage is related to smell function. This rhinosinusitis patient had severe blockage, yet her smell function was normal.

Diseases of the nose and/or sinuses contribute to most cases of smell loss. Examples of nasal-sinus disease (NSD) include:

Although nasal-sinus disease often causes swelling of the membranes lining the nasal cavity, we know that more than physical obstruction contributes to the related smell loss. Inflammation may play a role, but there likely are other factors. For example, it is possible that swelling of the tissue containing the olfactory receptors could stretch the receptor cells and damage their ability to function properly.

Another possibility is that changes in the composition of the mucous covering the olfactory receptors could interfere with the ability of odorant molecules to reach or activate the receptors. The possible role of such changes in anosmia related to nasal-sinus disease is an area that needs further experimental study. 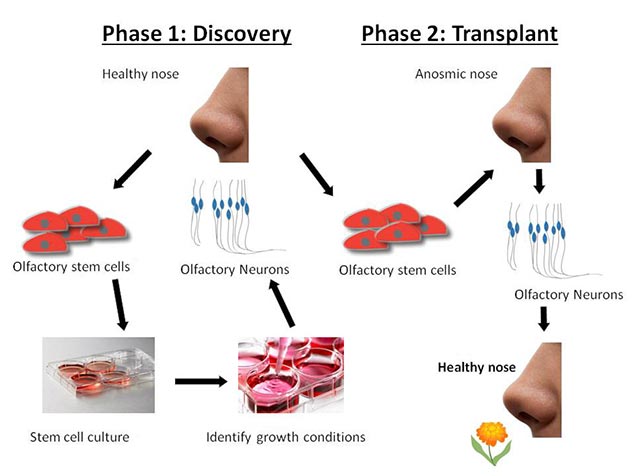 Monell’s on-going olfactory stem cell research may eventually be a potential treatment option for this group of patients.

The second most common cause of anosmia is a prior upper respiratory infection (URI), such as a cold. Viral damage to the olfactory receptors and the surrounding cells appears to be the only underlying mechanism for URI-related smell loss. Unless given very early during the actual viral infection, anti-inflammatory therapies such as steroids will not reverse anosmia caused by a URI.

Many people get URIs but most do not develop anosmia. An important future area of research will be to identify the genetic and biological factors that determine why certain people are more likely than others to become anosmic.

The third major cause for anosmia is head trauma. About 20-30 percent of head trauma patients have some type of problem with smell.

Crushing or cutting of olfactory nerve fibers where they pass through the small openings in the cribriform plate is believed to be the primary underlying cause responsible for anosmia following head trauma. The olfactory receptor cells likely try to regenerate, but scar tissue around the cribriform plate may prevent the nerves from reaching the brain. More central brain injuries may also contribute to smell loss following head trauma.

Blows to the back of the head appear be most likely to produce smell dysfunction. More severe injuries appear to increase the likelihood of anosmia, but smell loss also can occur after slight head injuries.

Aging, exposure to toxic chemicals and varied problems present at birth due to genetics or developmental causes are other well-established factors that can cause problems with smell. Several medical conditions (most notably Parkinson’s and Alzheimer’s disease, both of which are neurodegenerative diseases) have also been associated with smell disorders. Smell loss often appears before other symptoms of Parkinson’s or Alzheimer’s diseases are apparent.

Due to the relatively unprotected position of olfactory receptor neurons, they are susceptible to damage from pollutants in the air. Various airborne chemicals can damage the olfactory receptor cells and surrounding. Both short- and long-term exposures to a variety of chemical agents have been associated with smell problems, which can be either temporary or permanent. This factor may play an important role in age-related smell loss, as damage from the environment may be cumulative.

Some chemicals may directly affect the mucus overlying the olfactory receptors, which contains compounds vital to the healthy functioning of olfactory cells. Disease and aging also can cause changes to nasal mucus. Monell scientists currently are working to indentify which components of mucus are necessary to maintaining a normal sense of smell. These studies will pave the way to understanding how environmental or biologic mucus changes may contribute to some forms of anosmia.

There is still relatively little known about congenital anosmia. The principal genetic syndrome associated with anosmia is Kallmann’s, which is also characterized by a failure in sexual development. There are some reports in the medical literature of other forms of genetically-transmitted anosmia. However, most often there is no family history of a similar problem. It usually is difficult to know whether anosmia that is diagnosed during childhood was inborn or caused by a head injury or upper respiratory infection during infancy or early childhood.

Monell scientists are not physicians and cannot provide advice on diagnosis or potential treatment options. As part of our anosmia project, we will develop educational material on anosmia and other smell disorders to distribute to physicians.