Posted at 11:27h in Blog, News by Ahmed Barakat

As you read through this article, countries all the way from Western Europe to East Asia are being hit by massive bird flu outbreaks. In the UK, the public is being asked to stay away from the Solway Coast of Scotland in order to minimize contact with infected birds. And in Israel, the Environment Minister described the deaths of migratory birds as “the most serious damage to wildlife in the history of the country.”

The impacts of such aggressive outbreaks reach beyond the extermination of wild bird populations. Highly pathogenic bird flu can be fatal to humans as well as poultry, posing significant threats to public health and economies worldwide.

Wildlife biologists, as a result, have to stay on the lookout. Their continuous monitoring of bird populations in previously and potentially endemic areas has proven critical.

For that purpose, Dr. Bruce Kimball, a faculty member at Monell, has been on the forefront of researching innovative disease surveillance technologies since 2009.

Current surveillance procedures rely on biologists staging meetings with hunters to collect swabs from random samples of their harvested birds. When a sample tests positive for bird flu, appropriate action is taken in order to contain the virus and prevent potential outbreaks.

Dr. Kimball, along with Dr. Glen Golden of Colorado State University and others, is turning bird flu surveillance into a more efficient process, utilizing an accurate pre-screening method for detection of infected samples in the field.

Namely, the team has been studying the possibility of training dogs to become biodetectors that smell bird flu infections. This is now possible thanks to “growing and extensive evidence that certain diseases can alter animal bodily odors,” according to the research team’s recently published study.

The study builds on Dr. Kimball’s previous work, which showed mice can be successfully trained to detect bird-flu-induced changes in the fecal odors of ducks. Here, however, ferrets were the species being trained. “They were chosen as a proof-of-concept species to provide evidence that this bird flu detection ability was not unique to rodent species like mice,” explains Dr. Golden. The goal then was to find out if ferrets can, like mice, succeed in discriminating whether fecal samples belonged to healthy or infected ducks.

By the end of the study, when shown fecal samples from both healthy and infected ducks, ferrets successfully determined which boxes included feces of infected ducks with an accuracy of 86%. 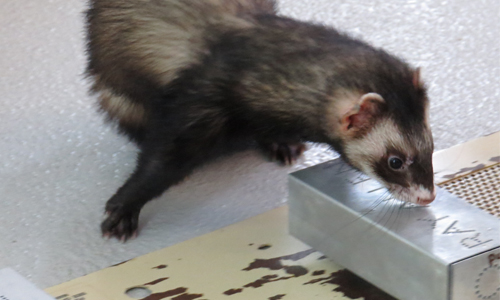 A ferret in the lab

The success of ferrets in detecting bird flu infections proves that this ability is not specific to mice and justifies the effort and resources that will be put in future studies. It now allows the team to move forward with training dogs for the job. And unlike mice or ferrets, dogs are equipped to work in the field and efficiently perform a task for longer hours.

In fact, Dr. Golden is already working with dogs that are being trained to detect changes in fecal odors associated with both bird flu and chronic wasting disease. In a study with fecal samples from bird-flu-infected and healthy birds, dogs were able to correctly identify the virus in 94.5% of the trials and correctly reject healthy samples 98.3% of the time. In similar bioassays, dogs correctly identified chronic wasting disease in 90.0% of their trials and correctly rejected healthy samples 97.3% of the time.

Future plans include training the dogs to detect infections in the field and later transitioning them from smelling fecal samples or swabs to detecting infection in freshly harvested bird carcasses. If these canine biodetectors of bird flu and other wildlife diseases prove successful and advantageous over current disease surveillance methods, they will become invaluable. The ability of dogs to smell disease may one day save your life, or perhaps even prevent a pandemic!