30 Jun Putting Smell on the Map

Posted at 10:36h in Blog by Ahmed Barakat

Our sense of smell is central to how we interact with our world and how we form memories of special moments and bonds. However, for many of us, it was not until the COVID-19 pandemic had taken away people’s ability to smell that we became more cognizant of this important component of our sensory experience.

This lack of awareness, in fact, even includes medical professionals such as ear, nose, and throat physicians. “Smell may be viewed by them not as a priority but rather as a vestigial sense, despite all the evidence against that view,” notes Valentina Parma, PhD, adjunct assistant member of Monell Chemical Senses Center. “We need to get smell testing to become part of routine medical care.”

Nowhere did this notion hit home more than at the recent Philadelphia Flower Show where a crew of Monell staff educated visitors on the importance of the sense of smell, as well as distributed SCENTinel, the rapid smell test developed by Monell scientists and collaborators at the height of the coronavirus pandemic.

“Current smell tests serve certain purposes in clinical testing and research, yet they do not meet the scientific and practical needs for population surveillance,” said Mackenzie Hannum, PhD, a Monell postdoctoral fellow. “SCENTinel’s adaptability, fast execution, and use of easily identifiable odors is now changing the landscape of available smell tests.” 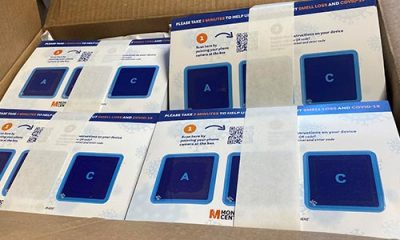 SCENTinel uses three subtests to cover multiple aspects of the sense of smell. First is odor detection, where a participant is asked if they can detect a smell under one of three patches. Next is odor intensity, where participants rate the strength of the odor they detect, which can track changes in smell ability. Even if a participant answers the first subtest correctly (e.g., odor detection), reporting a weak or diminished intensity can be a sign of a smell disorder. Finally, is odor identification, which is the ability to name the odor identified in the first subtest.

A total of 307 normosmics, anosmics, and participants with various smell disorders took part in the study. During the first part of the study validating SCENTinel’s accuracy, 94 percent of normosmic participants met the accuracy criteria of the test compared to 10 percent of those with anosmia. The study also compared SCENTinel with the NIH Toolbox® Odor Identification Test, a commercially available standard smell test. Normosmic participants took both tests to compare their performance: 92 percent of normosmics met the accuracy criteria for both tests, establishing that SCENTinel is comparable to the NIH Toolbox®.

Gathering SCENTinel data at the Flower Show was the first in-person outreach event since the pandemic and proved to be very helpful in developing these activities for gathering information on population-level data on the sense of smell beyond the height of the COVID19 pandemic. Forty visitors completed the test out of the 100-plus cards that were given out. The results mirrored those described in the Chemical Senses paper and at such other sites as universities, where the test was distributed. One intriguing finding is that the majority of test-takers at the Flower Show was much younger than expected – more in their late twenties to early thirties compared to the classic Flower Show demographic of the majority of visitors in their early sixties and older.

Being the quick and easy tool it is, SCENTinel can be adapted for different purposes. Other than the detection or validation of a smell disorder, it can be used repeatedly to monitor how someone’s sense of smell changes over time. SCENTinel also is a reminder that smell loss and disorders are disruptive yet invisible experiences. “Nobody can tell by looking at you that you have smell loss or that it comes with a reduction of quality of life, greater anxiety, and greater depression,” said Parma.

Monell’s overall aim is for SCENTinel to demonstrate to primary care physicians that actionable information results from regular smell testing and should be part of any test of smell loss caused by viral infections, brain injury, aging, and such neurodegenerative disorders as Parkinson’s disease. Read about SCENTinel in the news, here and here.