25 Jun Sweet-tooth Genetics: What We Can Learn from Sugar-loving Mice

Posted at 15:33h in Blog by Ahmed Barakat

Understanding how mammals process sweet taste has been one of Monell’s most important and longest research quests. Many of us eat too much sugar, and to help limit overconsumption, a better understanding of how sweet taste works is key. Scientists have known for over two decades that a receptor in the tongue is the gateway for taste cells to detect most sweet compounds, including sugars like glucose and sucrose, as well as other sweeteners like saccharin and aspartame.

The pathway of consuming sweeteners starts with the detection by taste buds in the tongue, then mouth-to-brain nerve transmission, and finally a gut-brain axis based on pleasure and energy. Perception of sweet taste starts in taste buds, but certainly does not end there.

In 2001, Gary Beauchamp, now Monell Distinguished Member and Director, and colleagues published a study in Chemical Senses describing differences in sweetener intake among inbred strains of mice, which are partially determined by variation of the saccharin preference (Sac) location, a short DNA region in the mouse genome. They found that this region contains a gene, called TAS1R3, encoding the third member of the T1R family of taste receptors. One version of TAS1R3 was prevalent in mouse strains (a group of genetically identical mice) with a big preference for sweeteners and the other version in strains less responsive to sweeteners. The strain that “liked” sweets most could detect it at a lower level and the other strain, not so much.

The team concluded Tas1r3 is equivalent to the Sac gene and the TAS1R3 receptor was, in part, responsible for mammals’ ability to taste sweet. “This line of research is one of the most exciting things I have participated in in science, but I was just the organizer and cheerleader,” said Beauchamp. 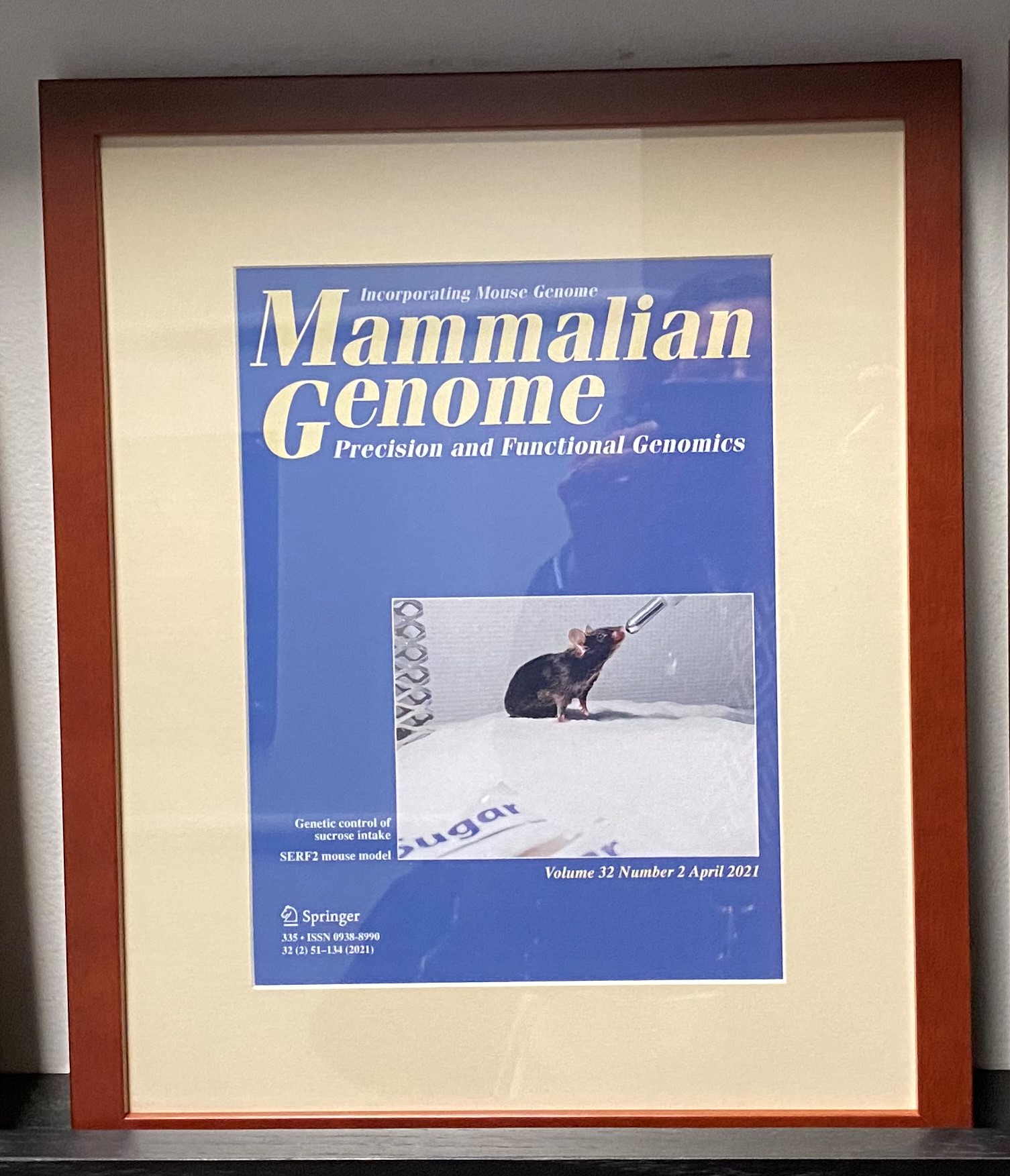 However, that was just the start of this sweet story because not all mouse-to-mouse differences were explained by the two versions of the TAS1R3 sweet receptor. Recently, Monellians were ready to share their work from the last two decades since the 2001 paper. In a pair of papers recently published in Mammalian Genome, and highlighted on the cover, they showed that several other genetic regions not associated with TAS1R3 contain variation that also help explain mouse-to-mouse differences in sweet liking.

“This is absolutely a monumental piece of science on what other genetic aspects are at work in sweet taste perception in mice,” said Beauchamp. The team found that many other genes are involved – those not part of sweet taste perception in tongue cells, per se, but perhaps in brain cells involved in modulating the detection of energy value in food and the pleasure or reward pathway associated with sweetness.

“The bottom line is that the mouse sweet tooth is more than just taste,” notes Monell Associate Director Danielle Reed, and coauthor on the 2001 and 2021 papers. “It also has to do with what the body does with sugar after it is consumed.”

One of the Mammalian Genome papers with a more global approach, by Reed, Beauchamp, Mike Tordoff, Cailu Lin, Monell alum Alex Bachmanov, and others, described several portions of the mouse genome that control sucrose intake. One mouse strain, called B6, consumed more sucrose and responded more strongly via a nerve called the chorda tympani compared to the 129 strain. The chorda tympani is a facial nerve leading from taste buds in the front of the tongue through the middle ear, carrying taste messages to the brain. To identify genetic contributions to differences in these strains associated with sucrose intake, the team cross-bred 627 mice and measured the sucrose consumption and taste-nerve activity in their offspring.

They then genotyped DNA markers distributed in every mouse chromosome and again saw the large effect of the different versions of the Tas1r3 gene. But these effects were so large that they overshadowed other effects of genetic differences among mice and made these differences hard to see and study. Nonetheless, these small effects were intriguing because they were not previously known and still contribute overall to the mouse sweet tooth.

The second Mammalian Genome study drilled down on these other small effects by removing the big effect of the different versions of the Tas1r3 gene so the smaller effects were easier to see and study. It turned out that the small effects changed how mice use the sugar rather than how well they could taste it. The team also learned that genes with smaller effects often cooperated with each other to make larger effects in explaining sweet taste patterns in mice.

Although understanding sweetness is a continuing tale, says Reed, the authors were surprised by their findings. “When we started this work, we thought what we were looking for had to do with taste nerves in the mouth, but it was more about how sugar is absorbed and used. We know this because mice with different versions of these genes burn sugar more than they burn fat for fuel.”

No matter how this body of research plays out in better understanding human metabolism, and eventually healthier living, the work of the newest Monell faculty member, Amber Alhadeff, who investigates the balance between nutrient need and consumption, will certainly play a role in finding out how the body handles the nutrients and calories we ingest from sugars and other sources.

“Sweet taste is only the first step in how the body responds to sugar,” says Alhadeff. “Work at Monell is showing just how powerful gastrointestinal detection and subsequent metabolism of sugar is, even in the absence of oral taste.” These studies are putting together the puzzle pieces for how sugar is detected, and will ultimately help us understand why sugar is so widely loved and consumed.