Posted at 15:19h in News, Press Releases by Ahmed Barakat

PHILADELPHIA – Sour taste does not have the nearly universal appeal that sweet taste does. Slightly sour foods or drinks such as yogurt and lemon juice are yummy to many, but such highly sour foods as spoiled milk are yucky, even dangerous. Like humans, many other animals, including insects, prefer slightly acidic over very acidic foods.

Evolutionary biologists surmise that the need for sour detection to be finely tuned is a two-sided coin: slightly acidic foods can enhance digestion and stimulate saliva production; relative sour-to-sweet taste can signal optimal ripeness of fruit; and extremely sour food, as with bitter taste, is a warning to what not to ingest. However, despite this usefulness, how do animals discern different concentrations of acid to produce contrasting feeding behaviors using the same sour-taste system?

A research group led by Yali Zhang, PhD, Principal Investigator at the Monell Chemical Senses Center, has recently addressed this long-standing question. Their work was recently published in Nature Communications.

Using the fruit fly as a research model, Zhang and his team set out to elucidate how animals tell the difference between low and high concentrations of acid. “We chose flies because they not only help us identify the genetic components involved in taste transduction, they also exhibit pronounced and distinct taste responses to a range of concentrations of acid compared to other animal models,” said Zhang. 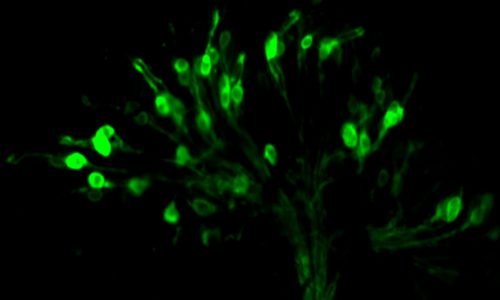 His team, including authors Tingwei Mi, John Mack, and Christopher Lee from the Monell Center and University of Pennsylvania, found that flies use two distinct types of gustatory (taste) receptor neurons (GRNs), which are analogous to taste receptor cells in mammals, to discriminate slightly from highly sour foods. One type of GRNs is maximally activated by low acidity, while the other type displays its best responses to high acidity. When tasting an acidic food, the fly’s brain evaluates the activation of both neuron populations and decides whether to choose or reject the acidic food, based on which type of neurons wins.

“We were thrilled to discover that a fly’s acid-taste behavior is dictated by a ‘tug-of-war’ between low- and high-acid-sensitive taste receptor cells,” said Zhang. This binary sour-taste system can explain why many animals, including humans, are attracted to low but repulsed by high concentrations of acids.

In addition, Zhang’s group identified a fly protein called Otopetrin-like (OtopLa), which has an analogous counterpart in humans, as a long sought-after sour taste receptor. OtopLa forms a proton-selective ion channel that is specifically required for attractive sour taste response. Remarkably, mutant flies lacking OtopLa are averse to low concentrations of acid as well as repulsed by higher concentrations.

“I believe our research on fly acid sensation can greatly advance our understanding of sour taste coding in other animals, including humans,” said Zhang.

This work was supported by the National Institute on Deafness and Other Communication Disorders and the Ambrose Monell Foundation.